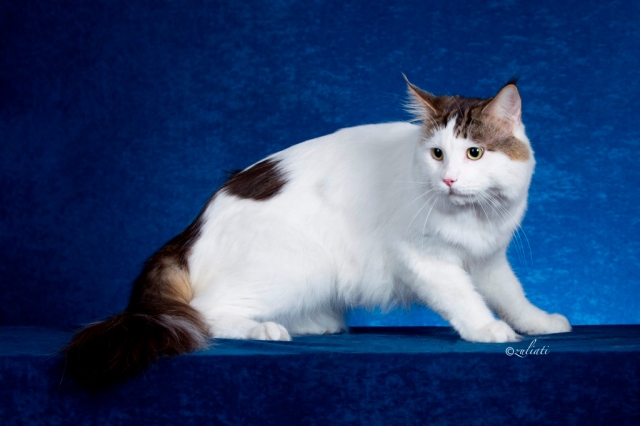 We were looking for a new male line and were lucky that Ike was available so we did not have to look elsewhere. This brown tabby-white boy was initially shy, very reserve and definitely does not like to be cuddled. Unfortunately, after staying with us for a couple of months, he is now a very spoiled, slightly reserve and does not really mind human contact brown tabby-white. LOL but he is adorable. We had hoped to introduce him to the world as our new baby at the Ipoh show on 15 September 2012 but it was not meant to be. He had an allergic reaction to the shampoo just days before the event resulting in red marks on his back and some loss of hair. Sigh, it took him about two weeks to recover. So we had no choice but to withdraw him from the show and it was supposed to have been his first show as an adult.

Due to recent developments and also because he does not have the right temperament, we have decided to retire him from the show hall. He is still slightly reserve, noticeably spoilt brat (my fault!) but hate the show halls. I am so sorry darling but you will be our head honco from now on since Putra has been retired from the breeding programme.

Bon Bon is the fifth kitten of Litter J. My first impression of him when he was born was wow what a cute face with the two spots on his cheek. I initially called him Tompok coz of the spots on his cheeks but Sara wanted a different name so in the end we agreed on Bon Bon. We were so happy with him, our very own red and white (my favourite colour!) boy. He has similar temperament as Sasha, shy, quiet and playful. But now that he is grown up, he is not so shy, not quiet but still playful.

We entered him and a few of his siblings from litters J and K at the 2015 Valentine’s Championship Cat Show in Hong Kong on Feb 14 & 15 whereby he was still a kitten and came home with Best Maine Coon Kitten in show, we were stunned and amazed. Our kittens were placed either as BOB or 2nd BOB in seven out of the eight rings. Even Karrina from J litter also finalled and had also beat her cousins/siblings for BOB. I am so proud! And to add icing to the cake, he was Malaysia’s 5h Best Kitten for Season 2014-2015, earning him the title of Divisional Winner as a kitten. Am sooo proud of this beautiful red and white boy of mine!

We hope that he will also be able to grand but he is very moody. At his first show as an adult at the 2nd Royal Canin International Cat Show 2015, Bangkok, on 7 March 2015, he was grumpy towards the end of the show. Poor baby kept snarling at any other cats he sees while we were taking him to the judging ring. In the end, we covered his eyes and kept talking to him so that he will not be looking around for someone to snap at. So we’ve decided not to show him at the next show at SSTwo Mall in Malaysia (PURINA ProPlan CFA Championship Cat Show 2015).

Looks like we have to work hard with Bon Bon to ensure that he is ready for the next show. Nevertheless, he is now in the breeding programme so hopefully after his first union with one of our girls, he will be less moody. I will look forward to grand him in the next season. 😀

The eldest of the K litter kittens, is one of the most beautiful red and whites we have at Lagenda Cattery. We are very proud of this boy. We entered him at the first CFA Show in Bandung and he did not disappoint. Even though there were stiff competition from other exhibitors (there were a lot of beautiful maine coons), he managed to get 229 Grand Points at that show, the highest scoring for a Lagenda kitten! To say we were happy and overjoyed is an understatement! He granded at that show and we are very happy with his development to date.