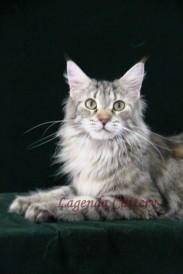 Union between Putra and Kandi arrived to celebrate Merdeka Day on 16 September 2013. There were five in the litter but one was stillborn. Baby G1 (Ghazal Gawain), Baby G2 (Ghazal Galahad) and Baby G4 (Gemersik Sari) made it to their fourth month. Baby G3 (Gamelan Ayu) left to cross the rainbow bridge on 8 December due to fluid in her lungs, she was the light of the litter, always calling me to quickly prepare her food and jumping with all four claws on my leg if I am late. I will miss you baby Gamelan Ayu, none of the others DARE to jump onto my leg, they will only stand on two paws and put the other two paws gingerly on my leg, not like you, you just pounce and I’d be screaming “ouch” every time, even though I was ready for you. 🙂 Say hello to Abang Shah and the rest ya Baby girl.

After two weeks of fighting, Gemersik also left us in the afternoon of 21 February 2014 while we were busy setting up at Angsana, Johor Bahru for our very first JBCC-CFA International Cat Show. I will miss you baby, you fought hard to stay but your body could not take the punishment. So now there’s only two boys left…..

From left : Gamelan, Galahad, Gawain and Gemersik before the girls crossed over the rainbow bridge one by one…..

Updated 18 April 2014. We have found a new home for the two boys. We hope they and their new parents will be happy with each other…. They will be leaving on 1 May 2014…. already feeling anxious and missing my two lovely red and whites ….. :((

Updated 1 August 2014. Gawain and Galahad are still here. Looks like the new owners decided to bail out :D. We don’t mind, we love you both so it doesn’t matter :))