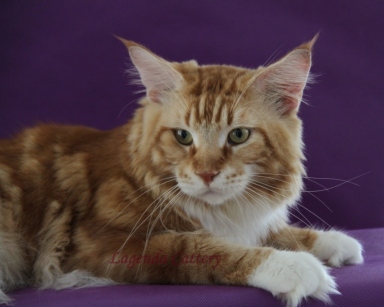 I met Putra when he was 7 months and 4 days old at a show on 26 February 2011 and fell in love immediately with him. After much gnashing of teeth and sleepless nights thinking of him (he was way, way beyond my budget!), we finally took the plunge and got him home on 24 March 2011. He was 8 months and 2 days by then and weights in at approximately 4.5kg. LOL he was big but such a softy!

We entered our first CFA show on 2 July 2011 at the Cat Friends Asia V show and Putra earned his right to the CH title. At the CFA’s Malaysia 2012 Finale Cat Show held on 14 April 2012, Putra surpassed our expectations and won 3rd Best Overall Champion at Yaeko Takano’s ring after getting his purple Best Champion Ribbon and then 2nd Best Longhair Champion! Am so proud of you baby! 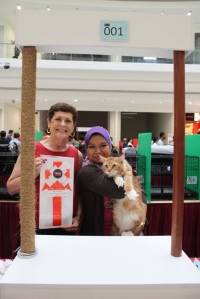 Putra also did us proud at our first TICA show, the Fabulous Feline-TICA 1st International 8 Rings Championship Show held on 20 May 2012 at the SSTwo Mall, PJ. He finalled in seven out of eight rings and was Highest Scoring Longhair Cat in Nancy Parkinson’s ring.

After several attempts, Putra finally granded at the 5th Cat City CFA International Cat Show in Kuching, Sarawak on 27 & 28 April 2013. He only needed 9 more points to grand and winning the purple ribbon was fantastic!

In early April 2015, we had to make the agonising decision to retire Putra from our breeding programme. We have several of his grandsons suitable to replace him. We hope you will behave and will not spray all over the place anymore once you have been neutered. We love you baby, our first foundation male who produced 6 grands (five from same female) plus one DW. We are very proud of you baby.

Our very own first litter, the fifth and youngest in the litter, did us proud at the tender age of 8 1/2 months in his first competition as an adult (open category) at the CFA International Division Awards Cat Show 2012 in Hong Kong on 28 & 29 July 2012. 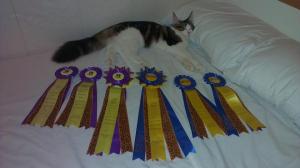 A very tired Muezza after his win in Hong Kong

Although we only knew later after confirming with Herman-online, nothing compares to the feeling of your very own home bred cat (at 8.5 months old to boot!), giving you your first Grand Champion title at his first show as an Open ie he Open to Grand in One Show (except of course for Putra winning his purple ribbon – he he he).

In the 2013/2014 season, we entered the first show of the year at the Two Ring Equilibrio International Cat Show 2013 – The Cat Lovers Show and Muezza, in his first show as an altered cat, did not disappoint us. He was Best of Breed in Pam Delabar’s ring and Second Best of Breed in Michael Schleissner’s ring. He then went on to final at 3rd place in Pam’s ring and was at 7th place in Michael’s ring.

We are very, very proud of this boy. He did not disappoint us at the PFF 3rd International 12 Rings CFA Champion Cat Show on 6 & 7 July 2013  in Bangkok, Thailand. On the first day he competed as a Champion and finalled in all six rings. At the end of the day, he granded – Two-show grand premier! On the second day, he competed as a Grand Premier and again finalled in all six rings. To top icing to his achievement, he was top five highest scoring cat in the Premiership class – very, very, very good achievement!

Hopefully, he will keep on finalising this season. 🙂

Tuks, as he is fondly known, is a friendly, loveable and huggable boy. Slightly bigger in size and more “solid” than his other sibling, he has also proven his mettle in his first show as an Open at the Le Viva International Feline Show 2012 held on 8 and 9 September 2012, where he managed to charm the judges and earned his CH title. 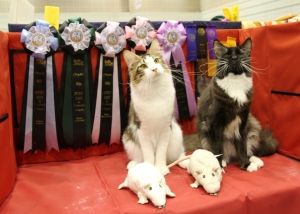 At the Siam Cat Show #5 held in Chiang Mai on 29 & 30 September 2012, Tuksido surpassed our expectations to earn a purple ribbon in Theresa Imborden’s ring and proceeded to win the 3rd Best Longhair Champion. Mama is so proud of you baby!

We are also proud to announce that he is now a daddy, Sasha gave birth in March 2013 to 9 babies of which unfortunately only 3 survived (two red and white boys and one brown patched girl). We hope that they will grow up to be as strongly built as the father, as pretty as the mother and have inherited both parents’ good traits. 🙂

After much thought and evaluation, we have decided to neuter Tuks to cater for future expansion of the cattery. He surprised us at his first show as an open premier in Chiang Mai by grabbing the 2nd Best of Breed in two rings (out of twelve rings), leaving Muezza with no feet to stand (literally – Muezza did not final in both rings!). He he he, it was a miscalculation by us but we are very very proud of him! He finalled in one of the two rings and also in another ring, bringing home 26 rosettes for being the only Long haired premier at that show. LOL but we had fun taking photos – soooooo many rosettes! :)). We hope he will grand in future as Citrus still needs three more Grands to get her DM title 🙂

Tuksido finally granded and since he was the fifth kitten that had granded, his dam Citrus had earned her Distinguished Merit title. Am soooo proud of her! 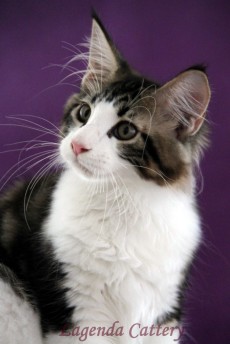 This boy is an almost exact replica of Muezza! We were very excited when he arrived and we hoped that he will grow up and develop as well as his other siblings.

We entered him for the FIFe show on 5 & 6 January 2013 at SACC Mall and we were absolutely thrilled that he and his sister Addira both got the Best in Variety award from the judge! So very proud!

At the Malaysia Finale CFA Show in April 2013, he came home with the CH title. We are very proud of you boy and hopefully you will grand one day.

Iftar has left us to stay with his new family……..

Happy to note that he entered his first show as a Premier at the 2014 CFA International Championship Cat Show on 8 February in Hong Kong. He did very well, getting 2 purple ribbons (Donna Fuller & Bob Zenda) and was 2nd BOB (Donna Fuller). He then went on to be Best All Breed Premier and was 10th best cat in Donna Fuller’s ring! So absolutely thrilled!

When we first heard from a friend that Electra was available for re-homing, we quickly called Wan Jahara (the owner/breeder). WJ informed that was reducing her maine coons in view of space constraints. Electra had to be spayed due to difficulty with her last pregnancy. We were very excited to bring her home in view that she is Putra’s mum, so two weeks later we went to pick her up.

It was also the first time we met Putra’s dad, CH Arena Anugerah Perdana Coon. OMG, OMG, OMG, Putra is baby face but Anugerah is the real macho cat! I wished I had my camera with me but had to make do with Sara’s handphone instead. Sigh, will need to visit him again, just to take more photos.

When she first came to our house, Electra was a bit thin having just recovered from her operations. And typically of the Arena cats, she is very timid and will jump at the slightest noise. 🙂 she is very cute, my all red cat but she is not “people friendly” ie she does not like to be held at all and will scurry away into one corner if you try to pick her up. 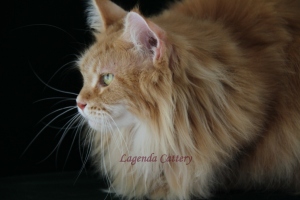 But now, she has filled up considerably and has come out of her shell to allow us to pick her up, stroke and cuddle her. She is still territorial and will not allow Pearl near me if I am holding her near (poor Pearl) but she tolerates Kandi and Bianca. Of course there will be the occasional spats with Dusky (who will always be the one who starts first) but all in all, I think she is happy.

And we are proud to announce that Electra has gained her Grand Premier title at her first show as an alter during the 5th Cat City International CFA Cat Show in Sarawak from 27 to 28 April 2013 ie she granded in one show!!!! Oh wow, first her grandson granded in one show, now she has proven that age, and several pregnancies later, is no barrier to this gusty old dame! And she came home as the 9th best premier of the show. So very, very, very proud of her.

We picked up our TICA registered girl on 27 February 2011 after placing her on layaway on 19 February 2011. Pearl was our first purebred maine coon and even though she is rather small (being the runt of the litter), she is very cute and has a very ladylike personality (except when she is on heat 🙂 ). She is also very, very demanding and would only eat the wet food served if we sit and watch her eat, else she will refuse to eat and we end up having to spoon feed her, the naughty girl. I believe she loves the extra attention given as she will sit demurely on our lap and happily opens her mouth whenever we spoon feed her. However, her favourite food is still the kitten kibbles, she does not need any help there thank you very much! LOL but she is sooooo adorable!

We had to retire her from our breeding programme due to her difficulty to conceive. 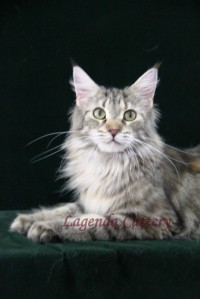 Again we would like to thank our friend and mentor, Norhayati Zakaria for giving us the opportunity to take care of this beautiful girl. She has a very sweet personality, talkative and also loves to be cuddled.

Kandi delivered her first litter (Litter D) on 11 December 2012 exactly on her 63rd day. Of the six, only one red boy survived. Darius Damak is a sweet boy and loves to chat.

Her second litter (Litter G) was delivered on 16 September 2013 ie on Malaysia day. Five were delivered but one stillborn – two red and white boys and 2 brown and white girls. Unfortunately, the elder girl (Gamelan) did not get to see her 3rd month birthday and the younger girl (Gemersik), despite fighting hard, did not survive and left us just after her 5th month birthday. So we are left with only two red and white boys (Gawain and Galahad). Despite losing them, we cherish our times together. I will always remember Gamelan as she was the only one who would scold me for being late with her food and will actually jump on to my legs with all four paws (and claws) out. Ouch, I can still feel her sometimes on my left leg (her favourite). IMHO, Gemersik had the best profile of them all and I was hoping she would be able to take over her mum’s role when she got older…. pity that she did not….

Both Gawain and Galahad are now happily driving Damak crazy coz they love to play with him and he prefers to be left alone. :). All three had since been rehomed with a loving family.