20 & 21 Sept 2014 : It was a great show, we had fun, laughter and tears and finally ended with dinner at Adilah’s. Thanks to Adilah’s mum for cooking that night and although we did bring 4 additional guests, the food was sufficient. Unfortunately, we forgot to take pictures of the dinner. Anyway, the full write-up with photos can be viewed here. 😀

14 Sept 2014 : Photos of Litters I, J & K are now online. You can view them here. For those interested to own a Lagenda kitten, please READ and understand the “Read this first” page of this website. It will save everyone a lot of trouble and headache. Thanks a million for understanding. You may email your queries to rmerican1@gmail.com :D.

9 Sept 2014 : LOL Sara finally uploaded photos of her trip to US when she attended the cat grooming school with Aida to get their Certified Feline Master Groomer certificate. Am very proud of both of them as they are the only CFMG in Malaysia 😀

6 Sept 2014 : Malaysia CFA and Fancy Get-Together – Good fun was had tonight. Thanks to Adilah who came up the idea to have an informal get together of the Malaysian Cat Fanciers. Once again, congratulations to all winners :D. See photos here.

31 August 2014 : CFA International Division Awards Banquet 2013/2014, Guangzhou, China. We really had fun in Guangzhou but due to time constraint and in view that my mum had to depend on the wheelchair, we had to restrict our shopping sprees to malls only. The Award dinner was very well organised and everyone had fun. Full story here.

14 July 2014 : A sad day indeed. Baby J3 left us to cross the rainbow bridge at the tender age of 44 days. Sigh, we found him two weeks ago with a swollen arm, most likely due to being stepped on by one of the mothers. The vet did say it was 50-50 if he could fight the infection from the swelling. He was doing ok the first week after taking antibiotics but we believe his immune system could not fight the infection and so we had to say good bye to him. Bye bye baby, you gave us joy even for the few weeks you were with us, we are going to miss you my huggy bear bear.

17 June 2014 : Very, very happy to announce the arrival of our precious Litter K (union between Addira and Ike – 2nd try, the first one Addira had a miscarriage and lost all). Again I am seeing a lot of red and whites! Baby K1@130g red & white (centre white triangle on forehead higher), Baby K2@125g red & white (centre white triangle on forehead lower than K1), Baby K3@115g (centre red triangle on forehead) and Baby K4@120g brown/black & white. Mother and kittens doing well. Addira is also a surrogate mum for one of Sasha’s babes. Human slaves had to work overtime to make sure all the babies (I, J & K) are fed every 2 to 3 hours 😀

14 June 2014 : Feline Groomers held their 1st Cat Grooming Workshop at our newly renovated Training Room in Plaza Jelutong. For this first session, we had 4 students from all over Malaysia who lasted it out for one day through a grueling theoretical session in the morning, followed by a demonstration on how to groom a cat and then the hands-on practical session to obtain their Certificate of Completion in Cat Grooming (the Feline Groomer’s way – he he he). Congratulations, you are our first batch who are carrying the name and honour of Feline Groomers.

31 May 2014 : Litter I, 4th union between Putra and Citrus, arrived in the early morning at 1am. Four beautiful babies were born but unfortunately, we lost the first two as their umbilical cords were twisted between each other and when the first one was born, the cords were pulled out. Poor babies. The first was a brown and white (80g) and the second was a brown patch (90g). It was a very heart wrenching and heart breaking sight to see both of them that way…… Anyway, happily the next one, a brown patch/tortie that looks like Mega (Baby Irina Iris, 95g) and the fourth, a brown and white that looks like Iftar (Baby Isaac Ilham, 125g), had no problems at all. Photos…

Apart from Muezza’s achievement, our Raina managed to get her GP title and best of them all, our Elrond was also a one show Grand this season. Blissssss……. 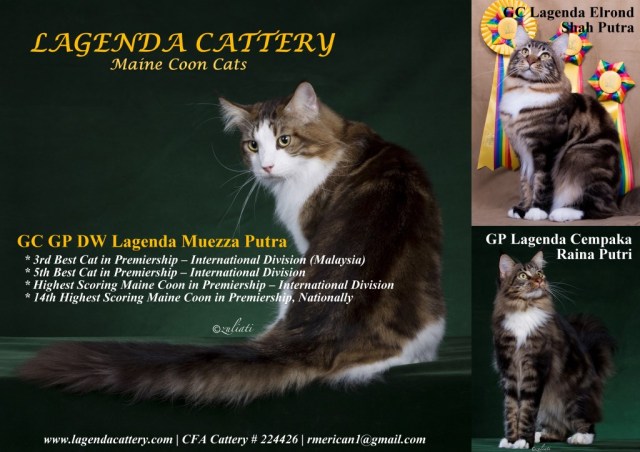 26 April 2014 : The final and last show of the season! The ACE Curtain Call International CFA Cat Show 2014 was successfully held at Dewan Centrum, Setiawangsa whereby all those who are campaigning were able to finally see where they stand in the Division.

We’ve fielded Muezza (but of course), Dark Knight (championship), Emrys (championship), Ariel (kitten) and Intan (kitten). All of them did reasonable well with Intan getting 2 2nd Best of Breeds and BoB, Ariel also getting 2nd BoB, Muezza also getting BoBs while the other two managed to either get Best of Colour or 2nd BoC. Not bad at all for the first timers in the kitten and championship category. Now both Emrys and Dark Knight can claim their CH titles :D.

See photos here (yet to be rearranged according to the Judges).

19 April 2014 : In line with their restructuring and rebranding exercise, the Aika Akira team renamed their shop to Paws Etc (Pet Grooming Centre and Pet Store) and held a Mini Carnival to celebrate and officially announce their new name. Qitta Catz is also pleased to announce that they are also carrying Jerob grooming products, Chubbs Bars and Sturdi products.

15 April 2014 : Jasmine left to go to her forever home with Alysha and her family. I hope they will be happy with her.

17 March 2014 : Yesterday both boys from Litter H opened their eyes. Unfortunately today Baby B said he is tired and slept on to cross the rainbow bridge. Say hello to your other siblings please especially Shah Putra…… So now only Baby A is left. We have decided to call him Hikayat Hercules.

12 March 2014 : Litter H (union between Ike and Bianca) has arrived! Two brown and white boys, Baby A  (111g) looks like Iftar whereas Baby B (116g) looks like the Addy/Shah twins. Baby B sounds a bit distress though, I think he has water in his lungs :(…. Photos

22 February 2014 : The Johor CFA International Cat Show 2014, our very first show! Not bad results, Muezza finalled in all four rings whilst Elrond did us proud by finalising in three rings. See here for photos.

21 February 2014 : Gemersik lost her battle to lung infection and left us to cross the rainbow bridge. Mama is sorry to see you go but you were a brave girl, fighting hard to stay but your body was too tired. It is ok, Mama loves you still and hope that one day we will be able to meet again.

8 February 2014 : The 2014 CFA International Championship Cat Show, Hong Kong Convention & Exhibition Centre, Wanchai, Hong Kong. Oh wow, the biggest show we have ever attended with more that 300 cats! It was crazy but we had fun. We entered Elrond and Iftar and both did very well indeed. The best news was : Elrond granded in two shows!!!!! If only Iftar had finalled in one more ring, he would have also granded in one show. Oh well, better luck next time baby. Am very proud of both cats, they are forever my RWs.